My husband sent me this column in The Irish Times in which Fintan O’Toole writes the following about Trump’s Muslim ban:

The problem the executive order is really meant to address is not terrorism, but Trump’s own campaign rhetoric. The order relates, not to actual, living, breathing events or conditions, but only to language.

It is pure postmodern politics: The order is a text that refers only to another text, which is Trump’s stump speech on the campaign trail and its dark promise of a “total and complete shutdown of Muslims entering the United States, until our country’s representatives can figure out what is going on.”

My husband knew I would find this interesting because I teach postmodernism in an American literary context quite frequently, and this certainly caught my eye.

O’Toole’s point about the ban mentions that not one person from any of the 7 countries covered by the ban have committed a terrorist attack within the US; because the Executive Order (EO) mentions 9/11 and the San Bernadino shooting, neither of which originated with visitors or citizens of those 7 countries, one is left to wonder what the purpose of the EO really is. And that, for O’Toole, is what makes the EO a postmodern text–because it is untethered to any objective reality.

And I would agree with him. Postmodernism, among other hallmarks, is defined by its resistance to any notion of objective, capital-T truth. Postmodernism developed out of the anxieties and uncertainties following WWII and the destructive capabilities of both atomic weapons and the Nazi war machine (how odd that both nuclear weapons and Nazis are such prominent topics right now!). It seemed humanity could no longer create anything new, but could only destroy. And since any and all notions of reality and Truth had been obliterated, artists sought different, non-traditional ways of making meaning. One method saw writers ratcheting up the meta-referential style the Modernists had started post-WWI, and another saw artists take bits and pieces of other artistic ideas and paste them together to make something else (often referred to as collage, both literally and figuratively).

And so, Donald Trump’s EOs seem to fit the bill. They are borne out anxieties and fears, and do not adhere to a fixed notion of reality. Instead, these orders are self-referential in the extreme, taking parts of document from the Obama administration, parts of ideas from  the Bush administration, and sticking them together to create a collage representative of the post-9/11 United States.

I’d rather have a soup can, honestly. 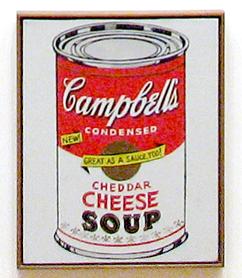 This entry was posted in Academia, Politics and tagged Donald Trump, politics, postmodern. Bookmark the permalink.