At the end of 2014, it’s hard to reflect on the year without considering the terrible violence committed against unarmed Black persons by police officers. Eric Garner. Michael Brown. Tamir Rice. John Crawford III. Akai Gurley. And these, really, are just the most widely known killings from this year.

The response–from the media, from city and state officials, and especially from police organizations themselves–has been disheartening. That these organizations support police officers is not surprising. That is an expected response, as it would be from any union. Unions exist to protect their workers, irrespective of the individual behavior of a worker. (The NFL Players’ Union support of Ray Rice and Adrian Peterson comes to mind here.) It is the reaction of these fraternal organizations toward protesters, victims’ groups, and others who are critical of the police that is disheartening. It is perhaps not surprising, however, that these predominantly white police unions should bear such animosity to these predominantly Black groups, as I noticed a precursor to such responses in my own research on the Free Southern Theatre.

The first response that caught my eye this year was that of the Cleveland Police Patrolman’s Association (CPPA) to the “Justice for Tamir Rice and John Crawford III” shirt worn by Cleveland Browns wide receiver Andrew Hawkins during a pre-game warmup.

In response to the protest, which made no criticism of any specific officer or department, the CPPA President said Hawkins was “pathetic,” “disrespecting officers,” and demanded an apology for this supposed affront. Neither Hawkins nor the Browns offered any such apology.

When members of the St. Louis Rams NFL team came onto the field for a game on November 30 in the now widely recognized “hands up–don’t shoot” posture, the St. Louis Police Officers Association (SLPOA) called the protest “tasteless, offensive, and inflammatory” and demanded an apology. The Rams did not offer an apology (although the SLPOA apparently thought they had). In St. Louis, there is a separate Black police union, called The Ethical Society of Police (ESOP), which condemned the SLPOA response to the Rams, distanced themselves from the comments, and commended the players’ actions.

There are no doubt many more examples of such responses to the terrible events of this past year, but these two in particular–from the CPPA and the SLPOA–recalled events in New Orleans over 40 years ago, and this is where my current research comes in.

In 1973, the Free Southern Theatre (FST) received a grant from the City Council of New Orleans for $15,000. The FST was a Black theater group which, by 1973, was holding acting and playwriting classes, producing plays, and doing general community education/outreach in the city. The funds given to the theater were to help them match a larger gift from the Ford Foundation. A few months after the Council vote, the Patrolmen’s Association of New Orleans (PANO) held a press conference to criticize the City Council’s decision and make it known that the FST was an anti-white, anti-cop organization, taking money from the police officers of New Orleans.

PANO was angry because overtime funding typically came out of the city’s general fund, the same fund the FST grant would be coming out of. (Note: it does not appear that the police force went without overtime pay in 1973; the group’s press release can only point to one specific grant the council refused to make that year—they did not approve a $7500 request from the local Veterans of Foreign Wars chapter).

The PANO President who ran the press conference for the union, Irwin Magri, accused the FST of being “anti-American, anti-law enforcement, and filled with the most vulgar of obscenities.” Magri goes on to describe the FST as obviously racist, as evidenced by its building on Dryades Street: “painted symbolically with the colors of red, green, and black—the colors of Black liberation.” Grandstanding even higher, Magri called for the FST to be investigated by the US Attorney General, the District Attorney, and the City Attorney for New Orleans for various violations pertaining to “subversion and criminal anarchy.”

There was some history behind PANO’s anti-FST anger, but the supposed flashpoint for the Union’s outrage centered in part on a play in which the American flag is “cursed,” “ripped from the wall, and tossed aside like a piece of trash.” This specific play, “Homecoming,” was produced in the 1969-1970 season, before the group moved to Dryades St. The outrage also was directed at a publication entitled “NKOMBO,” which was the FST published in 1970 which supposedly advocated “hatred between the races and hatred of law enforcement officers.” (In an interview with the theater critic for the Times-Picayune, Magri acknowledged he found no evidence of anything “subversive” any later than the FST’s 1970 season.)

Similar to the 2014 responses discussed earlier, the PANO response of 1973 was dismissive and, frankly, racist. PANO was widely known as a staunchly white organization, keeping Black officers out of leadership and drawing enough racist criticism that Black officers formed their own organization, the Black Order of Police (BOP). The BOP and the Greater New Orleans AFL-CIO, which was PANO’s larger union affiliate, both stood behind the FST, much to Irwin Magri’s consternation. The BOP saw the Free Southern Theater as “furthering the cultural needs of the Black community” and accused PANO of “spewing their racist feelings in an attempt to halt cultural enrichment in the Black community.”

As a co-organization in Black advancement, the BOP had a clear understanding of the FST’s worth and value to the local, Black neighborhoods. Magri, however, claimed that the BOP’s support of the FST was “well beyond my logical person’s imagination.” And in his column for PANO’s newsletter, The Star and Crescent, Magri did little to dispel such criticism that his organization was an anti-Black one, stating “It seems that every politician is worried about the Black vote. I think its high time to worry about the vote of citizens who have no color.” The controversy eventually died down, and all involved parties continued on their separate ways.

I find it particularly interesting that both St. Louis and New Orleans have their own separate Black police organizations and that each of them specifically supported what the larger, whiter police unions were denigrating. This certainly shines a light on the racial disparity in law enforcement in the United States. What it also suggests is that these organizations which support law enforcement officers are part and parcel of institutionalized racism in this country. These unions are majority white, with majority white leadership, and do not see themselves as part of the problem of racial violence in our country. These unions are also easily insulted, even when they are not the direct topic of protest. Andrew Hawkins’ shirt said nothing about police. It said “Justice.” The Free Southern Theatre’s plays were not about the New Orleans police department. They were about racism in America. Your organization has a problem if it interprets a cry for justice as a personal slap in the face.

Let’s use these lessons from the past to work toward a less violent, more just 2015.

*Portions of this blog post were presented at the 2014 meeting of the Midwest Modern Language Association in Detroit. 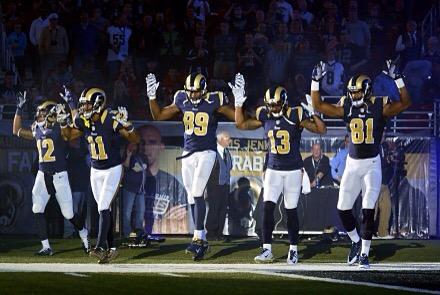