A Spin on Vernacular, Part Three 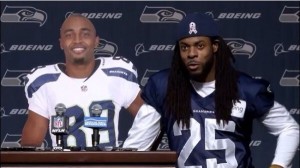 Seattle Seahawks cornerback Richard Sherman is quickly becoming a favorite athlete of mine. It’s true that I’m not the biggest football fan, but I do enjoying watching football games and cheering for the Indianapolis Colts and our grammar minded, bookworm quarterback, Andrew Luck. (yes, I’m from New England, but I just can’t with those Patriots, seriously.) I am not a fan of the NFL’s business practices or their incredibly short sighted view of their players’ lives and health. And so I watch games with the same conflicted feelings many of us have.

But next to Andrew, Richard Sherman has to be my favorite pro athlete; I’ve also written about him before. And with the Superbowl coming up, I wanted to take a look at one of his more famous press conferences from last November, in which he continues to demonstrate his linguistic prowess. His more widely-discussed public incidents show a keen use of Black vernacular and kinds of “Signifying,” a linguistic trope marked by indirect discourse, teasing, boasting, and other exchanges.

In his seminal study The Signifying Monkey, Henry Louis Gates, Jr notes the difficulty of pinning down exactly what, linguistically, Signifying is. One description that seems especially suited to analyzing Sherman is that of Signifying as an indirect means of saying your piece; this may involve humor, insults, boasting or other kinds of linguistic content. However, the content alone is not all that makes up Signifying. It can also involve “smart talking,” or “putting on,” which is a type of manipulative, persuasive talk. Above all else, Signifying places the speaker on an even (and then perhaps higher, in many cases) field with the other conversant.

Because Sherman and other players have strict rules about speaking to the press and their own public speech (i.e., they are required to talk to the press at certain times, but cannot say certain things any other times), a tension has developed between some players and the NFL/sports media. Most famously, Sherman’s teammate Marshawn Lynch has been fined for refusing to speak to the media; he has also shown up to press conferences but refused to answer questions. This is Lynch’s chosen form of resistance against what he thinks is an unfair labor practice.

In coming to Lynch’s defense, Sherman attended his own press conference press conference of November 24, 2014 carrying a life size cutout of teammate Doug Baldwin, behind which crouched the real Baldwin. In response to the first (and only) question, Sherman lamented the fact that If Lynch had shown up for his post game press conference, he wouldn’t have been paid $100,000, so why should he be fined the same amount for not speaking? He then goes on to ask cardboard Doug Baldwin if he thinks it’s fair that the NFL puts restrictions on player drinking but is also sponsored by the largest beer company in America. Sherman also observes that despite the NFL’s claim to care about player safety, the Seahawks were scheduled to play two games in five days.

Throughout the exchange, Sherman converses back and forth with Baldwin, who provides the voice for his own cutout. The cardboard Baldwin represents the type of player Sherman claims the NFL wants: one who is mindless and two dimensional. Additionally, Sherman notes that while the NFL demands speech of its players during press conferences and media days, it severely limits anything else players say, endorse, or do. The thrust of the entire appearance was that the NFL was behaving hypocritically.

This small bit of theatre can be linked to the kind of Signifying Gates and linguists talk about, namely the kind of rhetorical play utilized by one of lesser power against someone with more power. (That is not the only dynamic within Signifying, but it is the one most relevant here.) Sherman is using his “conversation” with Baldwin’s cutout to reveal the hypocritical nature of the NFL by using humor and verbal play, rather than a direct confrontation.

While Sherman’s “antics” get him a lot of press and a healthy following of both fans and detractors, I find his rhetorical personality to be endearing and intensely clever. I hope he’s planning for a great future after football; I think he can probably talk his way into anything.