Towards a Theory of Novelizing 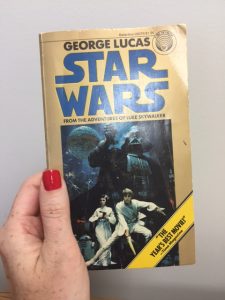 Earlier this week, I listened to this fascinating piece from an April edition of On the Media: http://www.wnyc.org/story/secret-life-novelizations-2. It discusses media tie in novels, focusing on what we more often refer to as “novelizations” of feature films. You know, the book that’s adapted from the screenplay and sold in every major bookstore. The segment interviewed many of the big names in media tie in authorship, including Alan Dean Foster, considered by many the king of media tie in novels and novelizations. I read a few of these adaptations in my childhood (for some reason, I remember reading the novelization of The Karate Kid), and was a big fan of the tie in novels for Star Trek: The Next Generation (Peter David definitely wrote the best ones). So I was interested to hear that Despite the record sales of these adapted novels, they are not granted much critical respect by literary critics or readership at large.

The International Association of Media Tie In Writers was formed in response to such attitudes, and to provide resources for media tie in authors. There is an archive of articles and interviews dedicated to promoting tie in writers and dispelling negative impressions about the work.

What I am particularly interested in is the question asked in the On the Media segment about somewhat selective respectability. Why is a film adaptation of a novel worthy of praise, but the reverse considered “hack work”? And I agree–why should one mode of adaptation be considered less worthy? Aren’t they both “unoriginal” works? Don’t they each require skills with dialogue, description, and fidelity? To answer these questions, I think theory can help us. In this case, film theory, which has been dealing with questions about adaptation almost from the beginning of cinema itself.

Dudley Andrew, in his book Concepts in Film Theory describes the relationship between cinematic texts and written ones, writing “adaptation is the appropriation of meaning from a prior text.” This may seem obvious when speaking of a filmed version of a novel, but it’s certainly the same for a novel adaptation of a film. Both processes rely on the meaning and general story of the original text, even if they diverge significantly. Andrew goes on to not that three modes of relation exist between film and text: “borrowing, intersection, and fidelity of transformation.” Borrowing is a common of adaptation; we might refer to it as a film “inspired by” or “based on” another text. Andrew cites Shakespeare adaptations as a familiar type of borrowing within cinema. Intersection seeks to replicate the original text exactly, or as much as is possible within a completely different media. These types of films “fear or refuse to adapt,” meaning they are faithful to a fault and promote the original texts “originality” above all else. Fidelity of transformation, which Andrew sees as tiresome to discuss, is a mode we often get mired in when discussing filmed adaptations of novels. How faithful is the film? Does it adhere to the “spirit” of the book?

Eventually, Andrew argues that the reason film and literature are so closely related in terms of adaptation is because they share a narrative language and sign systems. For his part, he sees adaptation theory as the study of “artistic history, practice, and discourse.” And this is where I think a discussion of novelizations could be productively situated. If film and literature are so closely related, then there should, logically, be no value differential between which direction the adaptation occurs. Translating film imagery onto the page is much the same type of artistic work as bringing the page to the screen.

Additionally, as we consider ourselves to be in a postmodern, or even post-postmodern period, the notion of a stable source material that is inviolate (i.e., the novel) goes against a solid 50 years (at least?) of literary theory and academic progress.

The University of Chicago Media School describes their work on adaptation in an interesting way, one which might allow media tie in work to finally get the due it deserves. Rather than a fixed, static notion of simply transcribing one text into another form, the Media School views adaptation as a dynamic process, similar to biological adaptation. How do texts and media forms update, change, and evolve given new historical, cultural, or political realities? This view of adaptation values the process over the type of product, and could help promote the work of tie in writers as equivalent to that of adapted screenplay writers.

And with that, I think I’ll go read some Buffy the Vampire Slayer graphic novels.

This entry was posted in Uncategorized. Bookmark the permalink.