Checking Out THE STREET 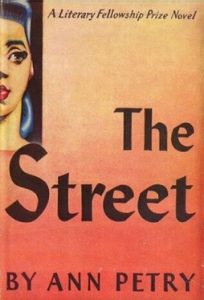 1st Edition cover of THE STREET by Ann Petry

I’ve been teaching Richard Wright’s Native Son for years in my American Literature since 1914 course. (See related posts under the tag for “Native Son”) But because the book has so many problematic components–rape, murder, violence against women, a really lagging third act–I decided I wanted to find a replacement for it for the upcoming Fall semester.

What could replace a book that falls within the era of the 1940s (thus bridging the period between the Harlem Renaissance and Postmodernism on my syllabus), presents a good example of Naturalism and is written by a person of color? Well, enter The Street.

I never read The Street by Ann Petry in graduate school (and, full disclosure, I haven’t quite finished an initial reading of it); my first introduction to it was, embarrassingly, though a panel I organized about intersectionality and urban settings. Two of the panelists discussed either the novel itself or Petry’s other work, and attendees were there specifically to discuss this novel. It is a novel of literary Naturalism (or social realism, as it is sometimes called), and it deals with many of the same themes as Wright’s novel, with the location transferred to New York City and the protagonist is a woman. Thus, the novel slips in rather easily to the syllabus void left by kicking out Native Son, but I don’t lose any of the thematic concerns already built up in the course.

The novel was a best seller when it was published in 1946, yet its popularity diminished over time. It focuses on the difficult life and conditions for Lutie Johnson, a single mother who desperately wants a safe, clean, happy life for herself and her young son, but finds herself constrained from attaining that by the usual deterministic conditions present in Naturalism: race, gender, class, urbanity, etc. Her poverty makes it impossible for her to leave her cramped apartment in 116th Street, with its creepy, lecherous superintendent and the local madam working out of the bottom floor. Every opportunity she tries to take advantage of fizzles out and she is left to continue on, knowing she can’t move past her current circumstances.

As the novel progresses, it shifts perspectives, from Lutie to her son Bub to the superintendent and more, always maintaining the clinical, detached, 3rd person narrative voice common in Naturalism. It also troubles Lutie’s own approach to advancement, limited though it may be. Despite her anger and resolve to hate white people for all they do to oppress and limit African Americans, she falls victim to what Ayesha Hardeson calls “pedestal womanhood” in her study, Writing Through Jane Crow. In other words, Lutie’s particular code of morality celebrates a kind of proper womanly behavior and denigrates the behavior of women like Mrs. Hedges, the madam in her building. Lower class women wear cheap clothes and smoke cigarettes and hang out of windows. Lutie is well-mannered, properly behaved, and refuses to do anything she deems to be beneath her station. As Hardeson points out, this is problematic, because as much as she may try, Lutie can never access the kind of respectability she believes she has earned, simply because she’s Black.

The drawbacks to teaching this novel, as I see them so far, are that it is quite long–though I don’t think it’s as long as Native Son–and it is a bit on the dry side for long stretches. Because of the shifts in perspective and the incessant flashbacks, not much really happens to advance the main plot. (The narrative reminds me a bit of Sandra Cisneros’ Caramelo, although that novel handles the ever-spiraling perspective shifts more expertly.) However, I think students will find it helpful and be challenged by the straightforward critiques of whiteness and the de facto Jim Crow of the North in the 20th century. I’d love to hear thoughts from other readers/teachers! How do you approach this text in the classroom?