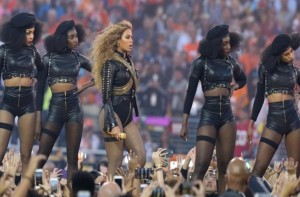 In part two of this blog post, I’d like to talk about the Superbowl halftime show featuring Beyoncé and her coterie of backup dancers. (Part I is here) Much has been made of their outfits, which echo components of the Black Panthers’ standard uniform. This aesthetic choice is complex and revealing, particularly when seen through the lens provided by Amy Abugo Ongiri’s book, Spectacular Blackness*. In it, Ongiri argues that the visual culture created and promoted by the Black Panthers, which included the famous leather jackets, turtlenecks, and berets, was instrumental in drawing both publicity to and identification with their cause. Their outfit was deliberately constructed for maximum impact and to counter the more “rustic” aesthetic embraced by the Civil Rights Movement (CRM) (73). Beyoncé’s dancers update the Panthers’ look and add Angela Davis inspired afros to complete the visual of Black Power. 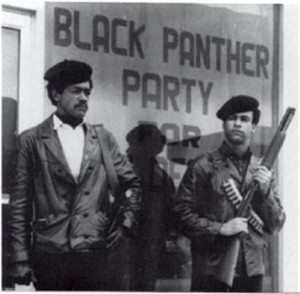 First, to ward off any criticism that Beyoncé is “commodifying” or “appropriating” Black Panther couture, let’s check in with Ongiri: she says the Panthers’ fashion choices “created an iconography whose power lay much more in its translatability to commodity culture than in its distance from it” (52). Ongiri argues that the Panthers were quite invested in a type of consumer culture that allowed their “look” to be borrowed and reinvented. She discusses their involvement in commercial films and albums, their line of greeting cards, and their unrealized plans for a wristwatch featuring Eldridge Cleaver on the face (56). For Ongiri, questions of commercialism and the purity of the Panthers ideology are beside the point–it is because of their careful attention to their image that the Panthers’ “critique of the criminal justice system” has long endured, not because they had any real success at reform. And when we see Beyoncé’s dancers in Panthers-inspired costumes, and note the politics of their performance, it seems that Ongiri has been proven correct.

Regarding those performance politics, those who have complained about Beyoncé’s performance have dismissed it as a celebration of violence and racism, due to the inclusion of the Black Panthers aesthetic, and yet the Panthers’ look was meant to merely suggest violence as a valid method of self-defense in opposition to the strategy of nonviolence promoted during the CRM. “Often in the early years, the Panthers’ guns were either not even loaded or at least not enough for any real gun battle. Like the … [outfits], the guns served a stylized, symbolic, visual notice that some African Americans rejected the doctrines of nonviolence and were prepared to organize themselves in a disciplined, military fashion for the defense of their communities” (Ongiri 74).

I would argue that the italicized phrase above is key to thinking through the visual implications of the Superbowl halftime show. While Beyoncé is leading her dancers in a military style costume of her own (inspired by Michael Jackson’s own Superbowl halftime show costume), the presentation of the dancers, the choreography, and song are all images of organization, discipline, and defense. What is more telling is that such imagery immediately strikes conservative pundits and fragile white people as offensive, instead of defensive. (After all, the spray painted phrase in the “Formation” video is “stop shooting us,” not “shoot all white people.”) That in turn suggests that it is the image of a strong, organized disciplined line of unarmed Black women that some find threatening, even while living in a society that allows people to carry handguns in classrooms. And thus, Beyoncé embodies a important pushback against prevailing cultural norms that perceive the Black body–and the Black female body, in particular–as threatening and unnatural.

And that is why Beyoncé slays.