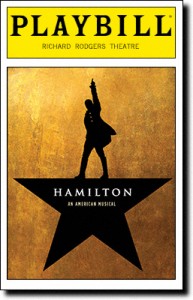 Everyone is talking about Hamilton and rightly so. I’ve been listening to the cast recording continuously since it came out, and I bet you have, too. It’s endlessly delighting, incredibly moving, and maintains a strong sense of thematic unity throughout every musical number.

What’s most intriguing to me about this musical is that it practically proves my entire doctoral thesis! In “This is Harlem Speaking Now”: The Cultural Politics of Vernacular and Twentieth Century African American Agitprop Theatre, I argue that the inclusion of African American Vernacular English (AAVE, also known as Ebonics) in plays by Black writers constitutes a political act, which then allows me to analyze the work of 20th century Black playwrights as agitptop drama.

Because Black speech was and is so often maligned, by writing dialogue in AAVE, playwrights are centering Black speech as important and valuable, rather than marginal. In Hamilton, Lin-Manuel Miranda makes a similar move, by writing dialogue for the Founders and other characters that incorporates hip-hop vocabulary, AAVE, and street slang alongside traditional/historical dialogue.

Along with the vernacular inspired book, the cast itself is notably diverse, with persons of color making up nearly the entire company. Thus, a play about America’s history becomes enthusiastically inclusive, upending the historically white narratives by portraying noted enslaver Thomas Jefferson, for example, as a Black man. That, in itself, is a political act as well.

Hamilton’s wild success is a testament not only to Miranda’s talent, the company’s skill, and savvy marketing, but also to the power of its diversity. It seems that a play need not feature mainly white folk in order to be popular. Hollywood should probably take a few notes.