On The Nightly Show and Diversity

With all of the talk and arguments over diversity within entertainment, one theme has emerged, time and again: it is incumbent upon the producers, creators, and makers out there to deliberately hire more women and more people of color (POC) in general, in order for things to truly diversify. We can’t just hope and pray for more POC to magically show up on our tvs and movie screens; we have to put them there. The people in charge have to provide the opportunities, as there is plenty of talent out there.  One particular example of this deliberate hiring strategy is Full Frontal with Samantha Bee, which has (thus far) a writer’s room that is 50% women, and 30% “nonwhite”.

While I am enjoying Full Frontal quite a bit, I wanted to focus this post on a show that might have started out a bit weak a year ago, but which has picked up steam ever since: The Nightly Show with Larry Wilmore. Not only is the writing and contributor staff quite diverse, but his roundtable segments (now featuring at least 2 show contributors) are often entirely nonwhite and sometimes all women panelists. I included just one screengrab as an example: 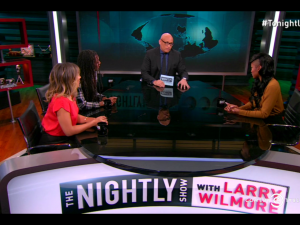 This particular segment featured regular contributors Robin Thede and Franchesca Ramsey, as well as guest Keke Palmer. The conversation was so delightful and funny that it didn’t hit me right away how groundbreaking this really was–a panel of entirely women of color on a late night show? When does that ever happen? The cast of contributors and writers also includes Grace Parra and Holly Walker, who also feature as panelists quite often. (And Parra does my favorite segment, “Nightly, Nightly.” Just watch it, you’ll get it.)

What The Nightly Show provides is something we certainly need to see more of on our screens, but it also demonstrates a hiring model that I am sure other TV shows, films, and news programs can follow. In fact, since the show has hired more women of color, notably Ramsey, it has gotten sharper and more interesting. Diverse hiring practices are not about “settling” or “passing over more qualified candidates,” or whatever whiny nonsense anti-POC people spout these days. Diversity can only strengthen something, so let’s see more of this, please.

This entry was posted in Uncategorized and tagged Black, diversity, larry wilmore, race, the nightly show. Bookmark the permalink.