And I am back from the 2016 scoring for AP English Language exams in Kansas City, MO. It was, as always, an intense week, but probably the best experience I’ve had at AP reading so far. I had an absolutely terrific group of teachers at my table, a really lovely table leader, and the food at the KC Convention Center was legitimately not bad. So I survived!

But this post is not really about the Reading. First, it’s about the very small walking tour of downtown Lawrence, Kansas I took last Sunday with about 200 other readers. We had registered in advance to see some of the sights of Langston Hughes’ childhood, which he spent part of in Lawrence. The tour was split into three groups, and my group was lead by Professor Randal Jelks, who has appointments in both American and African American studies at KU. He was funny and informative, and I got to see a few great sights–pictures are below.

However, the near 100 degree heat, amount of people in our groups, and the logistics of the tour itself (which is really more suited to driving than walking, except for the immediate downtown area) meant we couldn’t do very much. But I was happy to get a chance to see the area, as I’ve never been to KU before. Lawrence seems to have a lot of the same good and bad qualities of most college towns–quirky businesses, good bars, historic buildings, alongside gentrification worries and endless traffic/parking hassles.

It was also instructive to see the neighborhoods where Hughes grew up, and have the Black areas (or what used to be the Black only areas) pointed out so I could better visualize the politics of housing as it was in Hughes’ segregated childhood.

The second highlight was running near my hotel. I would get out the door around 5:30 am every day just to beat the heat and get a few miles in on the unbelievably hilly streets. My hotel was right next to the National World War I Museum and Memorial and only 2 miles away from the Thomas Hart Benton Home and Studio. Both are beautiful sites that I couldn’t properly visit, as I was hard at work scoring all day during visiting hours, but I have some pictures of both places below, as well. The Benton home, in particular, was a great find, as it was in a beautiful historic neighborhood with old houses and trees. I also really like Benton’s work. His famous Indiana history murals are housed at IU, and I often use a painting he did of the original Broadway cast of A Streetcar Named Desire in classes about the play.

So all in all, in was a great, but certainly tiring week. I am trying to rest up and stay cool, since the second summer teaching session is just around the corner! 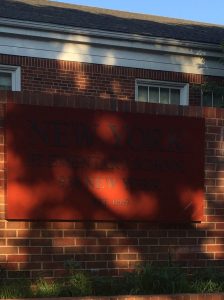 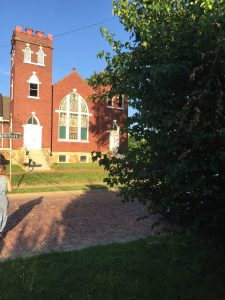 This is the St. Luke A.M.E. Church where Hughes would have attended, though he never identified as a Believer. This is the main fountain and tower at the WWI Memorial park (sorry for the crooked photo!) This entry was posted in Academia, Running, Teaching. Bookmark the permalink.